Unbottle and Protect Chaffee County Water is a non-profit organization. We formed to represent Chaffee County Citizens who united  against renewal of a permit authorizing Nestle Waters to mine water from Ruby Mountain Springs.  Citizens armed with common sense and an increasing knowledge about climate change and plastic pollution knew this was simply not a good operation, but we built a solid case based on Nestle’s permit non-compliance and broken promises.

You can watch our first presentation at the Oct. 20, 2020 public hearing here:  https://youtu.be/1bnmg4HcWM
(it is 2 hours of Nestle followed by one hour from us “the opposition”).

You can watch our last presentation at the  June 1st, 2021 public hearing here:

Unbottle Chaffee is committed to holding county public officials and the Blue Triton corporation accountable for permit compliance and transparency. In addition to serving as a watchdog group, we promote education about water issues and access to drinking water that is free of corporate commodification and plastic pollution. We have a three-pronged approach:
–>TRUTH: Continue researching and reporting past processes
–> TRANSPARENCY: Watchdogging current permit compliance
–> TRANSFORMATION: Work for future sustainable solutions

The company is permitted to suck and truck water from Chaffee County to Denver, where it is bottled, and sold in single-use plastic across the country as Arrowhead Brand Spring Water.

We persist as a watchdog organization.

Sign up for email updates!
Resources to learn more 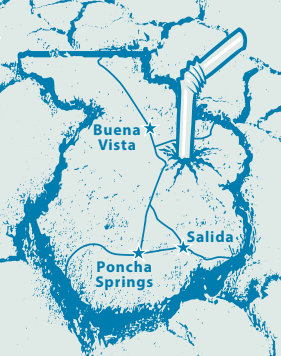 Truckloads of water per day

Million gallons of water per year

What can you do?

Citizens against Nestle in Michigan (12 min)

Technical revision 12 (not yet approved)

Transfer of water to private equity firms stirs opposition in US and Canada (Feb. 17, 2021)

Background on the Hagen exception and controversy. (See related reports under land/water tab).

Articles about Nestle in other communities:

Coca-Cola, Nestlé and PepsiCo named top plastic polluters for the second year in a row (October 23, 2019)

How Nestlé Gets Away With Pumping California’s Water for Next to Nothing Los Angeles Magazine (August 12, 2016)

1. Operating on land of state-wide interest requires a 1041 permit

Chaffee County commissioners can choose to deny Nestle Waters’ permit if they don’t find that the “benefits accruing county and citizens outweigh loss of resources or losses of opportunity to develop resources.” [1041 regulations 3-303 (1)(k)(vi)]

The permit could also be denied if they don’t find that “the need for the project can be substantiated.” Is Nestle’s operation beneficial or needed? [1041 regulations 3-303 (1)(a)]

Nestle’s community giving is a condition of their permit to mitigate the company’s impacts. How much does it cost to silence opposition from local organizations? Compared to the profits this multi-billion-dollar company makes from the water extracted here, is the approximately $270k given to area schools over the span of a decade nearly enough?

According to their annual reports, Nestle has contributed 292,596 plastic water bottles to the community since their permit was approved in 2009. Plastic pollution and global awareness of the issue has drastically increased over that ten-year term. Although Nestle requests another 10-year 1041 permit, such long terms are not necessary. Now days the county is subsidizing community recycling efforts. Should Nestle’s donations of single-use plastic water bottles still be considered an asset, rather than an impact?

4. Non-Compliance and conflicts of interest

As part of the original permit agreement, Nestle offered to put their land (located next to what is now Browns Canyon National Monument) into a permanent conservation easement “concurrent with construction of the project.” Over ten years have passed, and yet Nestle still has not done this. The company did, however, trade off the most valuable property, maximizing river frontage for the soon-to-be built Rio Frio Minor subdivision. A Nestle-paid consultant, who simultaneously served on the Chaffee County planning commission for 9 years, voted to approve the minor subdivision in Sept. 2019, before resigning from the county position this year.

Should an offer by Nestle to now put a conservation easement on their land, which surrounds the subdivision, still be considered fulfillment of their original agreement – despite the land swap? Nestle is floating a proposal to have Colorado Parks and Wildlife manage the land under a conservation easement if their permit is renewed. Is this seemingly philanthropic offer actually out of necessity because Nestle has not been in compliance with their land management plans (i.e. noxious weed management and grazing requirements)?

Nestle is currently allowed up to 200 gallons of water per minute, 65 million gallons per year, and up to 25 trucks per day. They have been taking less than half of that, so we can expect that impacts on the aquifer and traffic will more than double when they take the maximum amounts. Why wasn’t increased production or climate change factored into a Nestle-provided report which determined their operation here “sustainable?”

Colorado water law requires Nestle to augment the water they extract. But does the “replacement” water, which comes from the drought-stricken Colorado River watershed, that is released into the Arkansas River, mitigate all that is lost from the aquifer where Nestle’s wells are located? And although the replacement water is deemed drinkable, is it the same quality as the “spring water” that Nestle sucks and trucks out of the Upper Arkansas River Valley?

Nestle, a Swiss company with a global reputation of humanitarian and environmental abuses, self-monitors and self-reports with little review by Chaffee County professionals. And Nestle has requested to do even less monitoring (technical revision #12).

Nestle spells out in their request for renewal that they wish to quickly renew their permit as-is and will request revisions later (when not under the scrutiny of a public hearing).

For this extension request, the county has hired a hydrologist to review Nestle-provided data and an economist, but not an ecologist. The company recently sold to private equity companies and will be operating under a new name – Blue Triton.

Nestle failed to meet the permit requirement to hire at least 50% percent of their truck drivers from Chaffee County, despite relocating some drivers here. The company employed only 5 in 2019. The county expected far more local residents could be hired and those economic benefits were a factor when approving Nestle’s permit in 2009. How will the difference between the economic benefit that was expected and the economic reality be recovered?

Back to point #1, Do benefits accruing county and citizens outweigh the losses? Is Nestle’s operation needed here?

Jim Aragon (CPW) letter of support of boundary line adjustment – no where does it say it was requested by CPW though as Nestle claims!